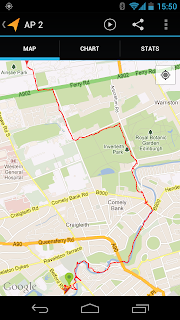 I recently wrote about how location services still have a long way to go. While this is still true, today I've seen at least some of the obvious stuff fixed, although it is far from perfect.

Google engineering has an absolute obsession with math and stats, well into the obsessive-compulsive range in my view. I'm assuming this explains why the open-source Google MyTracks app applies at least some smoothing maths to tracking unlike, say, MapMyRun which had me flying from spot to spot by taking location data too literally.

MyTracks isn't perfect. It shows me jumping from one side of a river to another, but then it doesn't know there's a river there. It also claims that I left the house at 22km/h, a speed that might not quite catch Usain Bolt but is way beyond anything I can achieve. Even my heuristic approach to such algorithmic matters would spot that an immediate speed of roughly twice the average run speed is probably wrong and correct it.

The app is also missing a few simple UX things - eg starting a few seconds after you press go to allow you to put the phone away - but it is free and works pretty well. I'm assuming that if you're not running along the bottom of a steep-sided valley it will probably work very acceptably.

In my case I can knock off a few hundred meters from the logged distance and get something that's close enough for my needs.
Posted by Richard M Marshall at 13:00