Location Still Off The Mark 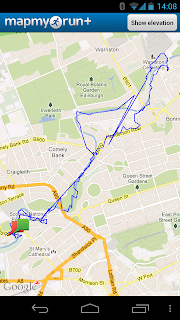 Location continues to roll into more and more services. Perhaps people are getting used to it, or maybe it's just that there are more and more back-end systems that deliver location information. However there's a problem: the location is all too often annoyingly wrong.

Let me site a few examples. I live on the edge of Edinburgh city center, yet Facebook systematically puts posts entered at home as being in Granton, which is the docks area and not particularly close. I have found no way to override this setting to something meaningful, like jumping up to city level and simply putting Edinburgh.

I love Path as a means of sharing considered photos with a small circle of friends and family. However it occasionally shows me arriving into completely random places, including Las Vegas and some strange place in rural China. I'm mystified where those came from.

And then there is MapMyRun which is supposed to track where you run. Normally I don't carry any tech with me when I run as I like the escape, but I thought it would be interesting to see what the result was. I was initially pleased to see that I had run much further than I'd expected. The pleasure turned to perplexment when I checked times, and then to irritation when I looked at the map. The tracked waypoints jumped around like crazy beans, as you may be able to see in the screen shot. Surely the coders of this app could work out that I could not have suddenly jumped 700m out and back in a few seconds. I can understand that they can't tell that I would have had to swim a river to achieve it, but even Usain Bolt couldn't have made that detour in the available time.

I've previously talked about the pointlessness of most location systems. Since then things have progressed and there are far more people using location regularly in the UK to make it more valuable. However it's got to be accurate. The quoted examples are just some of the issues I've seen recently. I still often find that the location I'm in does not show up at all or only on searching from it.

Often the list of locations presented in mobile apps is cached from last use which is at best desperate and at worst deeply stupid. But I can understand why, as acquiring location is still very slow. So I think we need to invent a location-based equivalent of cache time-to-live, perhaps distance-to-live. Any significant movement will wipe the cache content.

And I'd like need an equivalent of the Google Maps zoom control: I can scroll out from the name of a café up to country level depending on what I'm doing.

Location has clearly a long way yet to go yet.
Posted by Richard M Marshall at 14:06